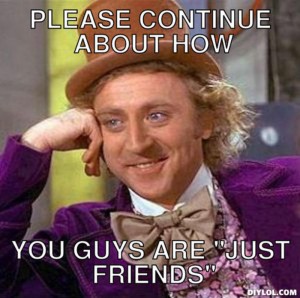 And therein lies the problem with emotional affairs (hereon EAs). Everyone knows that the regular type of affair means that a married person has entered into a physical or openly romantic relationship with someone who is not his/her spouse, without the spouse’s consent (and usually, without the spouse’s knowledge). The boundary was clear and the fact that the boundary has been transgressed is undeniable, which is why these affairs usually start out in secret. But what exactly is an emotional affair? Do emotional affairs really exist? And if they do, how are they different from platonic friendships between the sexes? [1]

There’s some really useless information out there (like this article here) that basically equates EAs with platonic friendships between the sexes, while other groups recognize that EAs are not the same thing as platonic friendships, but feel that the only way to truly safeguard a marriage from the eruption of an EA or physical affair (PA) is for the spouses to not have friendships with members of the opposite sex.

And then there’s the people who think that EAs don’t exist. One group of people will tell you that they don’t exist because, outside of physical affection for a member of the opposite sex, anything goes. Or, maybe some aspects of a friendship may be hurtful to a marriage and inappropriate, but it isn’t right to call that an affair of any type. Still others think that EAs don’t exist because EAs are really just PAs that haven’t been completely found out yet. When cheaters get caught, they almost always limit their acknowledgment of wrong-doing to what the faithful spouse is proven to know, so many a cheater has managed to prolong a PA by masking it as just an EA.

I disagree with most of these perspectives. The points I will be making in this series can be summed up as follows:

I’m going to do this while saying as little about my own personal experience as possible. I will say that I am genuinely convinced that my ex-husband’s first affair was a true emotional affair and never physical (he did later have a PA, but with a completely different woman). I will also say that I didn’t actually use the words “emotional affair” to my ex-husband until his EA was long over and the divorce was under way. While the affair was going on, I struggled a lot with why his “friendship” with this woman bothered me so much. After all, it wasn’t romantic, right? So what was so bad about it? Why didn’t I want him to have this “friend”?

[1] My language in this series isn’t particularly LGBT-friendly. I don’t really know what the LGBT-equivalent is for terms like “members of the opposite sex.” I do think that LGBT couples can fall prey to emotional affairs, too, and that almost everything I say in this article does apply to them. You’d just have to change some of my pronouns and terms.