Home » Divorce » The Fall of the House of Sidepieces

Upon waking to the news that the Ashley Madison hackers had made good on their threat to release their stash of stolen personal information, my reaction was pretty much:

For those of us who had our lives ripped apart by affairs, it’s hard to not smile at the sight of Team Sidepiece  getting some much-needed comeuppance. It’s hard not to chuckle at the spectacle of people who were lying to and betraying others being lied to and betrayed by Ashley Madison. While the victims of the Target and OPM hacks had done nothing wrong, these “victims” (sure, let’s call them that) could have used another run through Aesop’s fable about the farmer and the viper: “You knew I was a snake when you picked me up.” 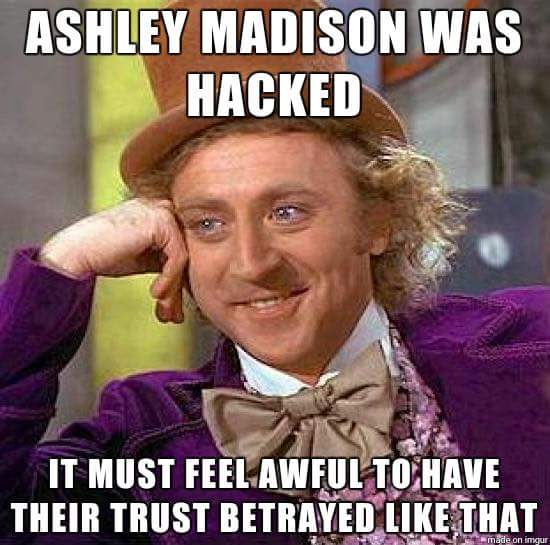 You knew that Ashley Madison was a company lacking in strong moral scruples when you signed up, so what were you thinking?

There will be innocent victims and collateral damage, to be sure, but let’s be real here. Most of these “victims” were not-so-innocent. Most of them were married people who were looking to screw strange behind their unsuspecting spouse’s back. Most of them were actively engaged in spousal abuse when they signed up (more on that in a moment).

As a society, our values on a lot of social issues have changed wildly in the past few decades. Interestingly enough, adultery hasn’t been one of them:

We still dislike adultery enough that most of us will say, at least superficially, that we are against it.

In spite of this, it hasn’t taken long for a cry to go out on behalf of the “victims” here, for the beginnings of pontificating on what this hack means and the looming end of privacy as we know it. Along with it has come a slew of slipshod apologetics on behalf of Team Adultery:

Valid points are being made. Yes, online bullying is wrong. No, engaging in reprehensible moral behavior does not automatically void one’s right to privacy. Yes, hacking is illegal and adultery isn’t (well, actually, adultery is still on the books as illegal in 21 states, but I’ll give you that it shouldn’t be).

But to the people who are brushing off the victims of adultery with “not everyone accepts your archaic morals”—let me talk to you for a minute.

Your dismissive attitude is disturbing because infidelity is abuse. It just is. Infidelity always means lying to one’s partner about the status of the marriage. It means changing the sexual nature of the union without the consent of every member of that union. Rape is sex without consent; infidelity is sex without the consent of all parties involved. They are both horrific acts of aggression and abuse. Not only that, but adulterers frequently gaslight, manipulate, and coerce their partners in order to maintain the affair. The victims of infidelity often suffer emotional, social, and financial consequences that are absolutely devastating.

How is that not abuse?

Yet here you are clutching your pearls and wringing your hands over how the tables have turned and the predators are now the prey. You cry crocodile tears because these cheaters may now become subject to emotional, social, and financial consequences that could be absolutely devastating. Where was that concern for their victims all the while Ashley Madison was operating unscathed?

But those of you who insist on being dismissive of the spousal abuse that is infidelity can bite me.