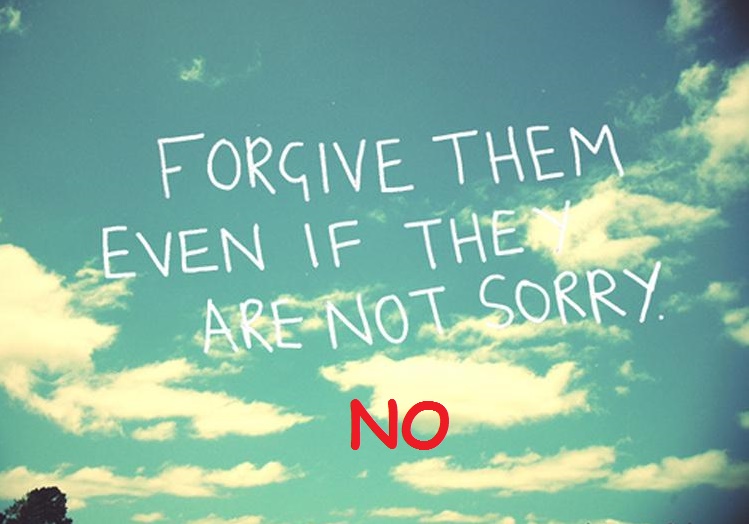 “You need to forgive.”

Any Christian who has survived the horror show that is infidelity has heard it before, usually from another well-meaning Christian: the assertion, the insistence, that we must forgive our (ex-)spouses and their affair partners immediately, regardless of whether or not they believe they have done anything wrong, to say nothing of apologizing and offering to make amends.

A very small portion of those who abuse their spouses with the sin of adultery are sorry. This post is not about the truly repentant. It’s about what Christian forgiveness looks like when someone has wronged you and isn’t sorry.

I’ve nearly finished Boundaries by Henry Cloud and John Townsend (which I’ll review later). It is a fantastic book in many ways, but in it, the authors give what is, I think, a very common Christian take on forgiveness. They distinguish between forgiveness and reconciliation and say that forgiveness takes one person, while reconciliation takes two. They say that Christians must always forgive, and that forgiveness is something that the other person does not need to ask for. Later, they even say that “to not forgive is the most stupid thing we can do.”

I beg to differ.

In Luke 17:3, Jesus teaches his disciples, “If your brother or sister sins against you, rebuke them; and if they repent, forgive them.” (NIV) Only then does he go on to say (v. 4), “Even if they sin against you seven times in a day and seven times come back to you saying ‘I repent,’ you must forgive them.”

If you examine the Scriptures in other places, it’s easy to see what the Bible really teaches about forgiveness.

Did Jesus tell the Pharisees and teachers of the law that their sins were forgiven? No. He called them “snakes” and “a brood of vipers” and warned them they would not escape being condemned to hell. (Matthew 23:33)

Did Paul instruct the Corinthians to forgive the “wicked person” who was guilty of sexual immorality? No. He urged them to expel him from the congregation. (1 Corinthians 5:13)

Did Peter forgive Ananias and Sapphira for their lie about the cost of the land they sold? No. He confronted each of them individually about their sin (Acts 5:3, 9), and God struck them dead (!).

The sad truth for most of us who deal with adultery is that we are dealing with people who are unrepentant and still actively sinning against us. Frequently our abusive, adulterous spouses continue the relationship with the Other Man / Other Woman, or they pretend to repent when they have no intention of ending the affair, or they go out of their way to devastate us in the divorce proceedings. We spend the rest of our lives with broken families having to co-parent with our shiny new “replacements,” yet other Christians cavalierly tell us to “forgive.”

Have you ever tried saying “I forgive you” to someone who did not think they had done anything wrong? Were they grateful? Of course not. When Jesus said, “A person who is forgiven little loves little” (Luke 7:47), he didn’t mean that there are people who only need to be forgiven a little bit. He meant that a person has to comprehend the enormity of his or her debt before forgiveness can be meaningful. Forgiving someone who doesn’t believe they’ve done anything wrong accomplishes nothing.

The correct response to such persons isn’t forgiveness. It’s rebuke. That person has to be rebuked in order for them to understand that what they have done is wrong in the hope that they will come to repentance.

Does this mean we should make persistent efforts to rebuke our (ex-)spouses and their affair partners? No; Jesus also told his disciples to shake off the dust of their feet against anyone who would not welcome them and listen to their words. (Matthew 10:14) I’m not going to text my ex-husband’s former mistress tomorrow and say, “Hi, it’s me again. I know you haven’t heard from me in over a year, but I hope you understand that your relationship with my husband was sinful and wrong. Kthnxbai!” She claims to be a Christian. She knows the truth and has worked hard at not having to hear it. I’ve shaken the dust of my feet off against her and moved on.

Does this mean we should never forgive without evidence of repentance, even when that person is deep in our past and hasn’t sinned against us in some time? No. Even real-life debts have a statute of limitation, for good reason. It’s possible that a person who is deep in your past is sorry for what they did, but doesn’t know how to contact you or have that conversation with you. However, this doesn’t apply to adulterous (ex-)spouses and affair partners who remain in you life, continue to make things difficult for you, and clearly aren’t sorry. Telling Christians to forgive such persons is like telling them to forgive someone who is currently punching them in the face. “Thanks, I’d love to forgive, but they kind of have to at least stop punching me in the face first!”

So, next time you want to tell a Christian to forgive their unrepentant ex-spouse and/or the Other Man / Other Woman… don’t. Instead, tell them to shake off the dust of their feet against them and move on. It’s a valid and biblical way of letting go.

2 Comments on On Forgiveness and Adultery