“So, we’ve decided that your son isn’t a good fit for our program.”

I froze in disbelief. A knot formed in my throat and tears welled up in my eyes.

She continued. “You should really have him evaluated for special needs. Has no one told you that before?”

I shook my head. She wasn’t mean about it, and she showed concern for my distress, but she was firm that their daycare was not the right program for my son.

It was only his second day with this new provider, and this was the second time in less than 2.5 months that my son had been abruptly dismissed from a daycare program without warning. It was the fourth time in that same time period that a childcare provider had bailed on my son.

The first had occurred on May 20th, when my son was suddenly kicked out of the daycare that he had attended part-time for eight months. They blamed the expulsion on a conversation that began with some gentle questions about anomalies on my bill, which left me feeling baffled. Since my son’s expulsion from that program, I have learned that this daycare chain has had at least two of its eleven locations closed by DCFS since 2014, with three other locations being closed, possibly while under investigation by DCFS. Yelp, Google, GlassDoor and Indeed are overflowing with reports of misconduct on the part of management from former employees and customers. At the time I did not connect my son’s expulsion to his behavior; it would have been a violation of Title III of the Americans with Disabilities Act for this daycare to kick my son out because of a suspected disability. In retrospect, their bizarre attempt to connect the expulsion to mild billing questions makes a lot more sense.

The second occurred immediately afterwards when I hired an in-home provider to watch my son temporarily while I tried to line up new daycare. By 11 AM she was spam-texting me at work, begging me to leave work early and come get my son because, “I cannot handle him, he doesn’t listen to me.” I chalked it up to her own lack of professionalism and irresponsibility (since when do toddlers listen, I asked), and I still do think it was unprofessional and irresponsible for her to not at least tough it out until the end of my work day.

The third occurred in early June, while I was in California attending the Mormon Theology Seminar. The evening nanny suddenly pulled a no-call no-show. She never gave me any explanation for her sudden abdication of duties. Now I wonder whether the difficulty level of watching my son wasn’t part of it.

Two other providers I had used on a temporary basis between June and July had expressed to me that my son was difficult, but they chose to hang in there.

Let me return to that fourth provider to bail on my son, the one that this post is about. As a private religious daycare, they were exempt from Title III of the ADA and free to tell me that they believed my son was disabled and they could not care for him because of that. I was in shock. While I knew that my son had a speech delay, he had done all of his regular well-child check-ups, and his physician had never suggested that he might be disabled in any way. The daycare provider that he had seen for 8 months—the one that had kicked him out on May 20th—had likewise never said they believed he needed to be evaluated for special needs (knowing what I know now about the quality of their care, I’m not surprised).

If you’re asking why I didn’t suspect something might be “wrong” with my son, remember that his 10 year-old sister is disabled (DiGeorge syndrome). He hit all of his non-speech milestones much better than she did when she was the same age, so I simply did not have the right basis for comparison. I knew my son was rather hyper and I knew he was behind on speech, but I didn’t think much else of it.

I had sincerely given thanks to God when I found this private religious daycare because daycare in the Chicago suburbs is really expensive. Full-time care for a two-year old easily costs $1200/month—more than the cost of Illinois public college tuition, but you can’t take out government loans for this tuition bill. I make enough money to not qualify for state-funded daycare assistance, but not enough to afford $1200/month in daycare bills every month (plus I pay for after-school care for my fifth grader, $165/month). My brother had previously kept my costs down by providing me with part-time care, but he moved back to Washington state at the end of July, so I needed full-time care. For months I had agonized about how to afford my upcoming need for full-time care. The religious daycare seemed to be my answer to prayer as they were only charging a very reasonable $780/month.

So there I was. Four daycare providers had quit on my son in less than 2.5 months, and two others had experienced difficulties managing him. I’m a single mom and I don’t have family in the area that can help me with the kids while I line up daycare. If I don’t have daycare, I don’t work, hence my tears that day. But it was time to acknowledge that, whatever the flaws of these daycare providers, I had missed something important that was going on with my son. 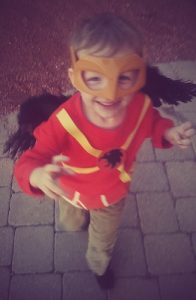 The next day, I marched my son into the local Early Intervention office and asked for an evaluation. Their evaluation led to an evaluation with the local school district, which led to him receiving an IEP categorization of “Developmentally Delayed Ages 3-9,” meaning it is expected he will catch up with his peers by no later than age 9. He started M-F AM public preschool in early October, shortly after his third birthday.

In the meantime, I still needed childcare. God answered my prayers. I was able to find a daycare center, run by a Christian woman, that only charges about $700/month for full-time care—the lowest rate I’ve had from anyone so far. They did struggle with my son at first, but did not give up on him and now have him comfortably adapted to his routines. They also haven’t been visited by DCFS in the 14 years they’ve been open.

I suspected that my son had severe ADHD, so at the same time, I lined up an evaluation with a pediatric neuropsychologist. By late October, I had a diagnosis, and it wasn’t ADHD. My son has high-functioning autism. The neuropsychologist suspects that he is of average or even above-average intelligence, and that he will be able to function autonomously as an adult, but with some social awkwardness. I initially felt overwhelmed by the news that I was now a single parent to two disabled children instead of one.

The neuropsychologist said I had already plugged my son into all of the interventions she would recommend save for Applied Behavior Analysis (ABA) therapy, a treatment that “can help over 90% of children [with autism] make substantial gains” in language & communication skills, social skills, IQ, and behavioral issues. ABA is most effective when it is “early and intensive,” 25-40 hours per week—which means it will replace daycare. Since I have good insurance, I can get ABA for my son with copays of only $20/day or about $400/month—far less than the already-low rate that I am currently paying for his full-time care. Wherever we wind up, so long as I work for my current employer, my son’s “daycare” should remain affordable from here on out.

More importantly though: had my son not been thrown out of that daycare in August, had they decided to “tough it out” and not say anything to me about their suspicions of his disabilities, my son would not have gotten the interventions he needs. I probably would not have had him evaluated by Early Intervention or the local school district. I probably would not have seen a neuropsychologist and gotten his autism diagnosis when I did, and he would not have received any ABA therapy prior to starting kindergarten in 2019. Now he has the best chance possible for a healthy life given his condition.

This isn’t meant to be an in-depth examination of theodicy, but I really do believe God has a plan for everything and that, even in the midst of disaster, God is in control. On the day that my son was dismissed from that daycare, I left in tears. I felt absolutely beaten down and exhausted when I crawled into bed that night. Three-and-a-half months later and I believe I can see the hand of God in it all. I can’t answer deeper problems like “why is my son autistic at all” or “why do I have the luxury of agonizing about this when other children are dying of hunger #FirstWorldProblems.” All I know is that something that seemed very bad at the time has turned out for good, and I am grateful.