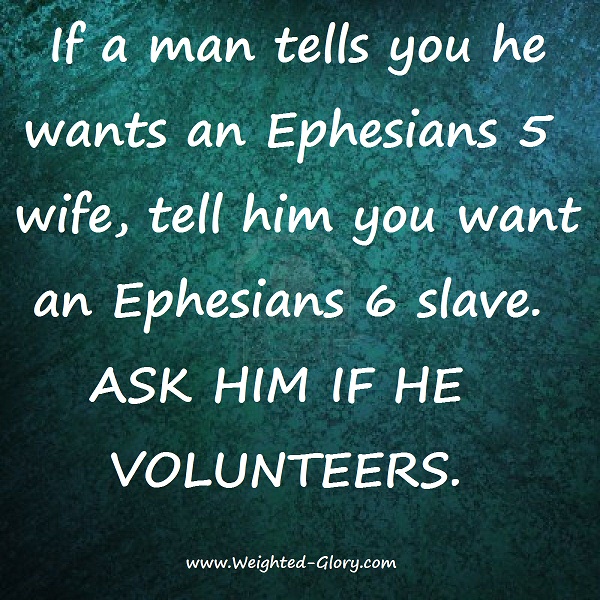 Those of us who support women in ministry are often accused of “not believing the Bible” when we explain that we have different interpretations of those few passages that, on the surface, appear to either restrict women from leadership roles or subjugate women to men.

If you look at those passages in context, you’ll find that those who restrict women in ministry “don’t believe in” the passages they use against women, either. (And by “don’t believe in,” I mean their definition of the phrase—where if a passage isn’t interpreted and implemented at face value, then the person in question “doesn’t believe in it” regardless of any hermeneutics or context that they may otherwise use to explain the passage.)

This isn’t some occasional problem with their hermeneutics. Literally, every single one of the key passages that they use to argue for the subordination of women has at least one verse that they routinely fail to preach or teach. They expect us to believe that the subordination / restriction verses are crystal clear, but when you point out the rest of the passage, the hemming and the hawing begins.

For this post, note that I’ll be using the abusive boyfriend of Bible translations, aka the English Standard Version, to show that even a translation that was created specifically to give safe space to evangelical complementarian views isn’t able to translate these passages in a way that they can teach and affirm. Normally I wouldn’t use the ESV for anything other than holding down the lid on my George Foreman grill.

“I do not permit a woman to teach or to exercise authority over a man; rather, she is to remain quiet.” (v. 12)

“Yet she will be saved through childbearing—if they continue in faith and love and holiness, with self-control.” (v. 15)

Comments: You may take pride in your church’s lack of female pastors, elders, and deacons, but if your church isn’t teaching that childless women go to hell, then it sounds to me like you don’t believe in 1 Timothy 2.

“As in all the churches of the saints, the women should keep silent in the churches. For they are not permitted to speak, but should be in submission, as the Law also says.” (v. 33a-34) [1]

Comments: “Silent” means “silent.” It does not mean “women can sing hymns, pray, chat in the foyer, give testimonies, make church announcements, and read Scripture aloud, but they can’t preach the main sermon in a Sunday service.” I’ve been to many, many churches where women were not permitted to preach or teach, but I’ve yet to attend even a single church that actually demanded that women keep silent in church.

Maybe when Paul said three chapters earlier that women could prophesy (which means preach) in the assembly (11:5), he actually knew what he was talking about, and 1 Corinthians 14:34 is about something else.

“[E]very wife who prays or prophesies with her head uncovered dishonors her head, since it is the same as if her head were shaven. For if a wife will not cover her head, then she should cut her hair short. But since it is disgraceful for a wife to cut off her hair or shave her head, let her cover her head. . . . Does not nature itself teach you that if a man wears long hair it is a disgrace for him, but if a woman has long hair, it is her glory? For her hair is given to her for a covering. If anyone is inclined to be contentious, we have no such practice, nor do the churches of God.” (v. 5-6, 14-16)

Comments: Again, I have been to many churches, but I have never been to a modern-day evangelical church that insisted on married women covering their heads at church. Paul even tells his readers, “If anyone is inclined to be contentious, we have no such [i. e. other] practice, nor do the churches of God,” yet they insist the head-covering thing is optional.

They also seem to think women prophesying in church is optional, since they won’t allow them to preach—and yes, prophesy is a form of preaching. Elsewhere in 1 Corinthians, Paul defines prophecy as instruction (14:31), encouragement (14:3, 31), strengthening (14:3), comforting (14:3), and the conviction of unbelievers (14:24-25), which sounds an awful lot like preaching, because it is.

The part they keep inserting into the text, even though it isn’t in the Greek:

“That is why a wife ought to have a symbol of authority on her head.” (v. 10, emphasis mine)

Comments: There is no “a symbol of” in the Greek text, hence the NIV translation of the passage: “[A] woman ought to have authority over her own head.” Big difference. [2]

“Wives, submit to your own husbands, as to the Lord. For the husband is the head of the wife even as Christ is the head of the church, his body, and is himself its Savior. Now as the church submits to Christ, so also wives should submit in everything to their husbands.” (v. 5:22)

“[Submit] to one another out of reverence for Christ . . . Slaves, obey your earthly masters with fear and trembling, with a sincere heart, as you would Christ, not by the way of eye-service, as people-pleasers, but as servants of Christ, doing the will of God from the heart, rendering service with a good will as to the Lord and not to man, knowing that whatever good anyone does, this he will receive back from the Lord, whether he is a slave or is free. Masters, do the same to them, and stop your threatening, knowing that he who is both their Master and yours is in heaven, and that there is no partiality with him.” (v. 5:21, 6:5-9)[3]

Comments: I literally just went to a sermon on Ephesians 5:22 – 6:4 three weekends ago. It actually wasn’t a bad sermon (the part on v. 5:22 was brief and not particularly unpacked), but I roll my eyes at this delicate dance that evangelical complementarians are always doing around the parts of this passage they can’t / won’t affirm. They like the wife subordination stuff, but mutual submission (v. 5:21) and slavery (v. 6:5-9), not so much, even though it’s all the exact same household code.

In the Greek, verse 22 doesn’t even have the word “submit;” it says, “Wives to husbands as to the Lord.” You have to supply the “submit” from the mutual submission part in v. 21. No one should ever read v. 22 without v. 21, because it doesn’t make any sense to separate them in Greek. [4] For more on this passage, see my article, “Of Ephesians 5 Wives and Ephesians 6 Slaves.”

When they accuse egalitarians of “not believing the Bible,” those who oppose women in ministry have four fingers pointing right back at them, for good reason. The difference with egalitarians is: we’re consistent. We think these entire passages are difficult to translate and/or interpret and/or apply to Christian practice and church polity in our day and age. We don’t pick and choose which parts are “crystal clear” and which parts aren’t.

[1] Note that grouping v. 33a with v. 34 is arguably yet another ESV mistranslation, but that isn’t relevant for the main point of this article.

[2] There isn’t even a footnote in the ESV to tell you that “a symbol of” doesn’t appear in the Greek text, even though a similar footnote is used in 1 Corinthians 14:22.

[3] Note that I am here using the 2007 edition of the ESV text. In 2010, the ESV translators revised their text to translate δοῦλος with the ridiculous and archaic “bondservant.” When you can’t win an argument, making the subject needlessly more complicated is always the next best strategy.

[4] The ESV mistranslates this, placing v. 21 at the end of one section then starting an entirely new section with v. 22, because of course it does.