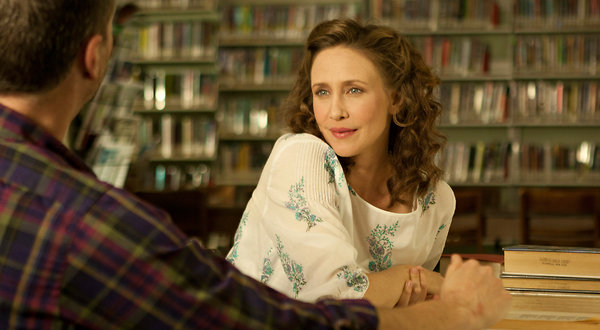 Higher Ground is about a woman named Corinne Briggs, played by Vera Farmiga (Up in the Air, The Departed) as an adult and Taissa Farmiga (American Horror Story) as a teenager. Corinne is raised in a Christian-in-name-only household where she occasionally attends a mainline Protestant church. As a young child, she answers an altar call and agrees to make Jesus Christ her Lord and Savior. Nothing dramatic happens in this moment, and when she tells her mother afterwards about her monumental decision, Mom does not even care. Even her pastor seems more interested in flirting with her mother than in calling attention to what has just happened. But Corinne’s promise is a sincere one. Naive, perhaps, but sincere.

The years pass. Life happens. Corinne meets a guy, falls in love, and gets pregnant out of wedlock, they get married. Her young husband has his heart set on a crazy dream of making it big in the music industry. Then the couple experiences a near-tragedy wherein they cry out to God, and they seem to witness a miracle. Is it really a miracle? Well, there are other possible explanations. But what matters is that theybelieve it’s a miracle, so Corinne and her husband newly dedicate their lives to God.

They join a rather conservative, overzealous, hippy church where they dive in head-first. Here the film showcases a lot of what evangelical Christianity is: the good, the bad, and the weird. Corinne goes to prayer meetings regularly, she stays up late with her fellow believers singing praises to God to an acoustic guitar, and she scolds non-believers for not being as righteous as she is. Her husband attends sessions where the pastor makes the men listen to awkward sex instruction tapes on how to properly “pleasure” their wives (think Tim LaHaye’s The Act of Marriage). At first, their newfound commitment to faith seems to be working out well for the couple.

And yet, Corinne can never shake the feeling that she does not quite fit in. She’s a sincere believer, but a rather unconventional one. She is a passionate, outspoken woman with a keen, inquisitive mind, and that’s the kind of combination that is not always well-nurtured by evangelical culture. She’s chided for “coming awfully close to preaching” at a co-ed meeting (women shouldn’t preach to men, you see), for wearing an off-the-shoulder maternity dress (“You wouldn’t want to be guilty of causing a brother to stumble, would you?”). She’s notably uncomfortable with charismatic talk of “binding Satan.” Despite this, Corinne is fortunate to have an exuberant, exotic, Pentecostal friend named Annika (Dagmara Dominczyk), who is also an unconventional Christian. Annika speaks in tongues, decorates her bedroom walls with drawings of her husband’s penis, and lies her way out of a speeding ticket by talking to the officer about her “veggie” (wedgie) in a fake foreign accent. Annika intrigues Corinne, who begins trying to explore the gift of tongues—which her husband says is probably “satanic.” As much as she fails to fit in at church, with Annika as her anchor, Corinne seems able to go on.

Things change though. Corinne suffers tragedy and loses someone close to her. The congregation sings “It is Well with My Soul,” but it’s pretty clear that it is not well with Corinne’s soul. Her marriage becomes strained. She begins to doubt the faith that she’s had since she was a child.

I don’t know if the people who made this film are evangelicals, but it’s precisely the sort of film that I wish evangelicals would make. It manages to tell a story of faith found, lost, then found again without coming across as naive or preachy. It doesn’t shy away from evangelicalism’s flaws; it owns them, and still manages to bend them into something profoundly moving. This has a lot to do with the fact that Vera Farmiga both stars and directs. Farmiga is exactly the kind of actor who knows how to make you feel every inch of her deeply flawed character’s anguish and pain. You love her even when you know that she’s in the wrong.

This rates as one of my favorite religious films ever. Highly recommended.

(This post was originally written for a forum in 2012, but never published to a blog.)