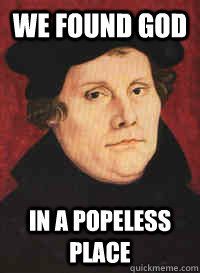 In searching for the Martin Luther quote that had troubled me in my youth, I came across a quote on a number of sites critical of Christianity, usually on “look at these misogynist things famous Christians said!” shock lists.

“No gown worse becomes a woman than the desire to be wise.”

The problem: it isn’t clear that Martin Luther ever said this.

I’m no expert on Luther–the focus of my MA was American church history, not Reformation history–but I did do a class on Luther and the Reformation, and this quote seemed “off” to me. Luther was certainly against the ordination of women (and you know what I think about that) but beyond that, most of his problematic statements on women were rooted in his attempts to valorize marriage and childbirth as part of his polemics against Roman Catholic celibacy, and there is a sort of logic to them. That doesn’t make him any less wrong, but there was more going on than unbridled contempt for women. I can’t say the same for any number of Christian theologians who came before him, especially amongst the early church fathers.

The quote’s proliferation in the modern-day skeptical community probably traces back to Charles Bufe’s 1992 Heretic’s Handbook of Quotations where it appears next to another quote from Table Talk (more on Table Talk as a source for Luther in a moment). Culture Wars: The Threat to Your Family and Your Freedom by Marie Alena Castle (2013) grouped the two quotes Bufe used together, giving the definite impression that they appear next to each other in the Table Talk text, when they do not. Castle was probably working from Bufe as both books are published by Bufe’s anarchist See Sharp Press.

The quote is poorly sourced though. Most Web sites, books, and memes cite it unattributed or list Table Talk as the source with no information about just where one could find it in Table Talk (which is a rather large volume). I was able to track down the original quote though:

“There is no gown or garment that worse becomes a woman than when she will be wise.” – The Table Talk of Martin Luther, translated and edited by William Hazlitt, 1857; DCCCCIII (under “Miscellaneous), p. 367

The quote appears in several works from the 1800s and early 1900s, including the writings of Elizabeth Cady Stanton.

So what is Table Talk, and is it a reliable source for Luther?

Table Talk was compiled and published by Luther’s friends and students twenty years after his death, based on notes taken between 1531 and 1544. As the name implies, the notes were largely based on conversations around Luther’s dinner table, where his wife was said to brew some excellent beer, though other settings were used as well. The comments included jokes, banter, and any number of off-handed remarks, in addition to more serious theological discourse. The work used to be regarded as too second-hand to be useful, but in recent years, scholars have begun to view it more favorably. Nevertheless, it is not on the same level as something that Luther wrote and published himself in his lifetime. To attribute quotes from it to Luther without qualification on the provenance of these quotes is sloppy at best.

In the case of the quote in question, the comment appears in its own section without any information about the context in which it was said. The immediate preceding section is actually complimentary of women:

“I have oftentimes noted, when women receive the doctrine of the gospel, they are far more fervent in faith, they hold to it more stiff and fast, than men do; as we see in the loving Magdalen, who was more hearty and bold than Peter.”

In Luther on Women: A Sourcebook, Susan C. Karant-Nunn and Merry E. Wiesner-Hanks translate the text not as “wise” but “clever”: “There is no dress that suits a woman or maiden so badly as wanting to be clever.” I can’t find the German text online (and alas, German is not one of my languages), but this leads me to wonder if–assuming the quote is accurate–Luther meant “clever” in the sense of “cheeky” or “impish,” i.e. a smartass, rather than “wise, educated, knowledgeable.” This would make better sense when paired with the complimentary remarks that immediately precede the problematic quote.

Whatever the case, here’s a meme of my own, with apologies to Luther for my cheekiness:

3 Comments on Did Luther really say women shouldn’t be wise?