Home » Gender » Who is Junia? An Overview 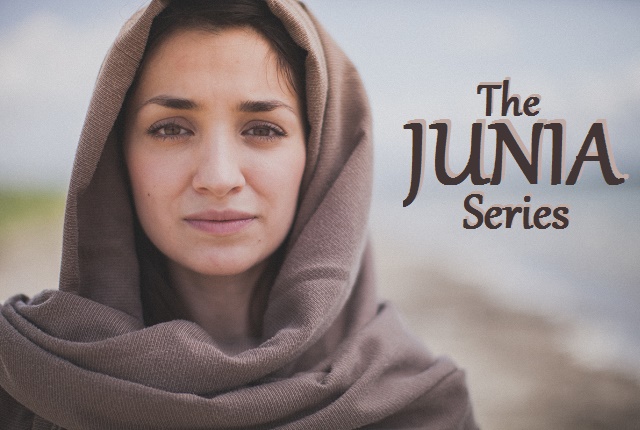 Junia is a first-century woman mentioned in the New Testament, in Romans 16:7. Paul includes her on a long list of greetings to local Christians in Rome:

What does this small sentence tell us about Junia? Quite a lot, actually! Specifically, eight different things:

She was a woman

Junia was an incredibly common woman’s name in the first-century Roman empire, comparable to “Charlotte” or “Olivia” in America in our day and age. Any woman of the Roman gens Junia would be called “Junia;” in fact, if a family had more than one daughter, they would both/all be called by the feminine of the gens name. For example, the three daughters of Julius Caesar’s mistress Servilia (wife of Decimus Junius Silanus) were Junia Prima, Junia Secunda, and Junia Terta—so you can see how Junia would be such a common woman’s name. Just as we don’t see boys named “Charlotte” or “Olivia” because the masculine forms of those names would be “Charles” and “Oliver,” we don’t see men in antiquity named “Junia” or “Junias” because the masculine form of that name would be “Junius.”

She had a partner in ministry named Andronicus

Most likely, Andronicus and Junia were husband and wife, though a brother-sister or father-daughter relationship is also possible. We almost never see women in couple pairings with men like this unless they were married or had some other familial relationship with the man in question, because “women in early Jewish culture were not supposed to fraternize with men they were not related to.” [2]

Paul calls them his “relatives,” meaning fellow Jews, yet her name was Roman. It was common for first-century Jews to adopt Greco-Roman names for everyday use; think “Peter” instead of “Simeon” or “Simon.” Often (but not always) this name was phonetically similar to their Hebrew names, so Junia’s Jewish name may have been Joanna. Alternatively, “Andronicus” was a common name among freed slaves, so she, along with her husband, may have been a former slave and freedwoman who kept the Roman name of the family that owned her. There is extremely reliable early corroboration of female slaves and freedwomen serving as officers and leaders in the early church. [3]

She was imprisoned for the Gospel with Paul

Paul calls Junia his “co-captive” or “fellow prisoner,” indicating that she and Andronicus spent time in prison with him for preaching the Gospel alongside him. Ben Witherington III explains, “Criminal women were generally not jailed but put under house arrest—unless they had done something really notorious or notable to offend a city’s officials. Paul appears to be suggesting that Junia and [Andronicus] were, like him, ringleaders of the ‘notorious’ Christian sect that was causing so much trouble throughout the empire.” [4]

She was outstanding at her ministry

Paul commends her and Andronicus as ἐπίσημοι, which literally means “stamped” or “marked.” Colloquially it means “outstanding,” “distinguished,” or “famous.” This was high praise from Paul!

She was among the earliest Christians

Paul says that Andronicus and Junia were “in Christ” before he was. We don’t know how early her faith in Jesus goes back, but likely she was among his larger group of itinerant disciples (which included “many” women, ) because . . .

Paul calls her an “apostle”

It is unlikely that she was a member of the Twelve because, after Matthias’ replacement of Judas the Betrayer for the establishment of the church, there ceases to be any evidence that members of the Twelve were replaced. Acts says nothing about James being replaced after his death in Acts 12:2.

But there is a wider group of individuals called “apostles” of whom Paul is a part of. The church in Corinth eventually came under threat from people posing as false apostles (2 Cor. 11:13). Likely these false apostles were claiming to be from this wider group, as it would have been difficult to fake apostleship if there were only twelve known “apostles” engaged in itinerant ministry. Paul indicates that apostles had to have witnessed the resurrected Christ (1 Cor. 9:1), but that his own post-ascension witness of Christ was “last” and abnormal (1 Cor. 15:8). This would possibly place Junia either among the female disciples who witnessed Christ outside the empty tomb (Luke 24:1-11) or among the 500 whom Christ appeared to after his resurrection (1 Corinthians 15:6-7).

The answer is, “that ought to be it.” Anything else we could say about Junia would be tradition or speculation, such as Origen positing that she was among the seventy-two [5], or the theory that she was the Joanna of Luke 8:3 & 24:10 [6], or the Eastern Orthodox church’s traditions about her serving in Pannonia alongside Andronicus.

That said, there is a high degree of certainty that Scripture tells us all of the things that I laid out above, and Junia represents a wonderful opportunity for us to reflect on and celebrate women’s clear New Testament role in preaching the Gospel. Women preached Christ to others at his birth, during his ministry (John 4:28-30), and at his resurrection (Matt. 28:7). As Witherington notes, women were “last at the cross, first at the tomb, first to hear the Easter message, first to proclaim it and first to see the risen Lord.” [7] Thus Junia represents a continuation of New Testament female preaching about Jesus—not a revelation of it—and the text tells us this woman was outstanding at it! That she was imprisoned for her work for the Gospel!

But people who don’t want to ordain women find Junia devastating to their point of view. So sprang into life a centuries-old tradition of making Junia into a man, along with a more modern tradition of translating the passage so as to render her a non-apostle. I will address both of these arguments as the series progresses.

For now, I turn to the patristic evidence on Junia.

[1] I will address Al Wolter’s paper and theory later in this series.

[5] See my next post in this series, “Origen on the Apostle Junia.”

[6] Some have speculated that she was the same woman as Joanna “the wife of Chuza, the manager of Herod’s household.” This Joanna was a patron of Jesus’ ministry (Luke 8:3) and a witness of the resurrected Christ at the empty tomb (Luke 24:10). It’s unlikely that a Jew named “Chuza” would take on the name “Andronicus,” so if Joanna and Junia really are one and the same, Chuza must have died or divorced Joanna/Junia for her role in preaching the Gospel, and she remarried a Jewish freedman named Andronicus. See Richard Bauckham, Gospel Women: Studies of the Named Women in the Gospels (Grand Rapids, MI: Eerdmans, 2002), 109-202; also Witherington, 12-14, 46. This is just one possibility though; it’s equally possible that Junia is mentioned by name nowhere else in the New Testament.

3 Comments on Who is Junia? An Overview