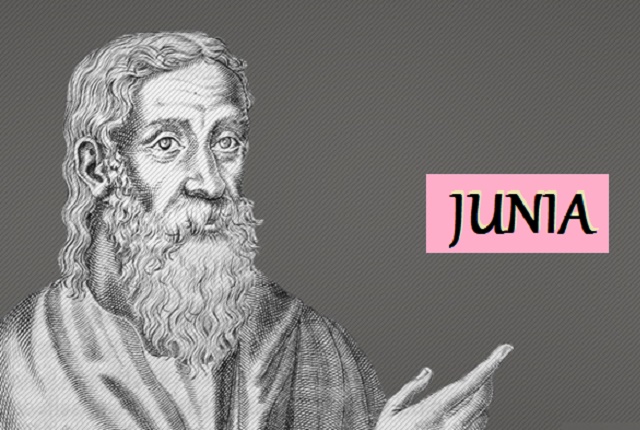 Origen (AD 184/185 – 253/254) serves as one of six patristic witnesses [1] who commented on the apostle Junia and confirmed two of the three points of contention about her, namely, her gender and her apostolic status. While many Junia commentators mention this about Origen in passing, few bother to actually quote his comments on her in full, so I am presenting them here as a resource. Origen’s comments prove interesting because, not only does he confirm that Junia was an apostle in some sense, he says she was possibly a member of the seventy-two who were commissioned by Christ in Luke 10:1ff, a group that is predominantly thought of as exclusively male and viewed as an ordained, authoritative and/or venerated body in some church traditions. Later documents purporting to list the seventy disciples commissioned by Christ during his ministry would sometimes include women like Junia and Priscilla, but only after first turning them into men (!) [2] Origen, it would seem, had less reservations about a female member of the seventy.

If you have not studied Origen, know that while he wrote in Greek, the Greek text of his work survives only in fragments and quotations from other authors. Rather, most of his work has been preserved via a Latin translation by Rufinus of Aquileia (AD 345 – 410). This gives us two patristic witnesses for the price of one, as Rufinus’ Latin translation clears up some of the alleged ambiguity of the Greek text, assuming Origen quoted Romans 16 accurately.

The translations below are my own, working from Caroline P. Hammond Bammel’s critical edition of the Latin text. [3]

However, it troubles me when he says, “my fellow captives” (concaptivos meos). For, in fact, which imprisonment of Paul was there in which he attests that Andronicus and Junia (Andronicum et Iuniam) are also fellow prisoners (concaptivos)? Unless perhaps, by a more profound mystery, we should reflect on the captivity which Christ came to end, of which it is written was for coming and giving release to the captives and sight to the blind. They would seem to be in that captivity by one and the same estimation as even Paul was. Truly, if by way of example we were to say: when the nation of Israel was captive among the Assyrians or the Babylonians, all, indeed, seemed to be captives, but there was one reason for the captivity of everybody else and another for Daniel and Hananiah and also Azariah and Mishael. The former were in fact captives because of their sins, while in truth the others were captives themselves for the comfort of the captives. And on that account, if Daniel were to call someone from the common people, “My fellow captive” (concaptivus meus), it would not seem to be said as suitably as if he were to say to Hananiah and Azariah and Mishael, “My fellow captives” (concaptivi mei). With the latter, there is one reason for captivity which is very different from the reason for the rest of the nation. And so in this way Paul, perceiving something similar between himself and Andronicus and Junia (Andronico ac Iunia) according to the reasoning of a more concealed mystery, called them his fellow captives (concaptivos) in this world and excellent among the apostles (nobiles in apostolis).

Greet Herodion, my relative. And as with Andronicus and Junia (Andronicus et Iunia), this man is called a relative of Paul, but unlike them, he is named neither a fellow captive (concaptivus) nor excellent among the apostles (nobilis in apostolis) among those who were in Christ before Paul. From this it should be discerned that there is a considerable difference even among those whom Paul calls his relatives, in my opinion, according to the hypothesis that we undertook to explain above.

Otherwise, if anyone disagrees with interpreting these things as a figure of speech, let him set forth to us how Timothy and Jason and Sosipater, who were citizens not just of greatly different cities but even provinces, were somehow relatives and of the same blood as Paul, and not just them but even Andronicus and Junia (Andronicus et Iunia) and Herodion, all of whom he names his relatives and fellow captives (concaptivos).

Conclusion: Origen said that Junia was a woman, an apostle in some sense for whom a “considerable difference” existed between herself and other believers, and a possible member of the seventy-two (Luke 10:1ff). As the earliest commentator on Junia, Origen’s witness is an important one, every bit as important as the oft-cited passage from John Chrysostom. Christians who advocate for this forgotten female apostle would do well to refer to Origen liberally.

[2] See my post on the Index Discipulorum later in this series.

13 Comments on Origen on the Apostle Junia: A New Translation