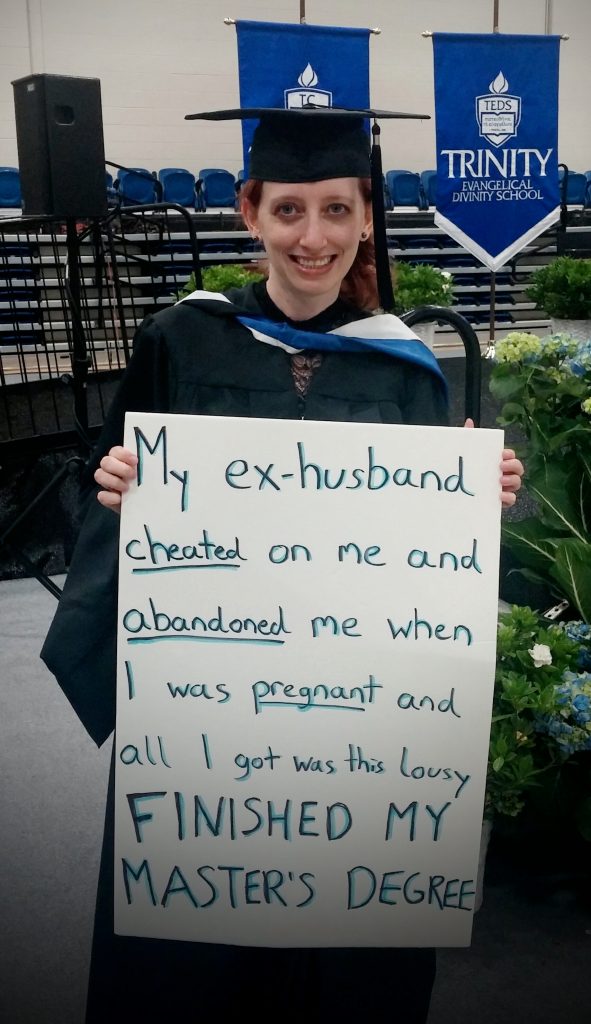 I went and spoke to Bro. Fluhman today, and not only was he enormously helpful, but I enjoyed the conversation and I was very impressed by him. . . . He also talked to me about doing American Religious History for my master’s. The thought had honestly never occurred to me. But I will keep it in mind.
— Journal entry, Thursday, 20 February 2003

I did my undergraduate degree at Brigham Young University, a college that was (and probably still is) 98.6% Mormon. In my time at BYU, two things happened to bring me to where I am today:

It’s taken me a long time to get to this point, for reasons I have discussed elsewhere, but it finally happened. Last week, my thesis (“As God Is, Woman May Become?: Women and the Mormon Doctrine of Exaltation”) was accepted for ProQuest publication. Maxine Hanks, who edited the first feminist book I ever picked up, Women and Authority: Re-emerging Mormon Feminism, served as my external reader on my thesis committee and gave me invaluable guidance. Commencement took place on Friday. I am now the proud owner of an MA in “History of Christianity in America” [1] from Trinity Evangelical Divinity School.

It’s been a long road. The “me” who first met up with those TEDS students and chatted with Brother Fluhman in his office never dreamed of what the future would hold: marrying a Mormon, a disabled child, dropping out of the MA — American History program at the University of Utah, being abandoned while pregnant, divorce, and becoming a single parent to a disabled older child and a baby. I never would have started the degree at TEDS under those circumstances.

But with the help of God and a lot of loving, supportive people in my life, I finally finished it.

My next academic goal is to finish my Human Resources Management Certificate at Harper College, something that I started working on in September. I finish my second-to-last class this Tuesday and have one more class after that. I’m not entirely sure whether I’ll be finishing that class now or in the fall; hopefully it will be done by July.

After that, I plan to take a break from school. I have no idea whether I will ever do another degree or certificate. My advisor at TEDS was encouraging me to do a PhD to the very end, and says I would be good at it, but I would really need my life circumstances to change before I could consider going back to school. (“If God puts a rich man in my life,” I joked to him.) MDiv, MBA, or Graduate Certificate in Women’s Studies are all programs that I could be interested in, but for now, I just want to focus on building up a career in human resources and being there for my children.

You can catch me at the Third Annual Mormon Theology Seminar at Graduate Theological Union in Berkeley on June 15th. I hope to always be involved in Mormon studies in my spare time, even if that amounts to only occasionally.

[1] An interesting note on my program is that it was discontinued in 2009, just after I enrolled at TEDS. The administration initially told me that I would have switch to the “Church History” program, then changed their minds and said I was grandfathered in and could complete the HCA program. As such, I may be the only person to hold the HCA degree. However, if you compare the current “Church History” program to what it was when I entered, you can see it has become broader and can now encompass a focus on American church history.