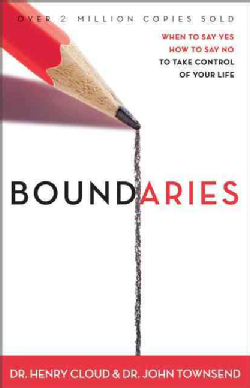 Boundaries: When to Say Yes, How to Say No to Take Control of Your Life by Henry Cloud and John Townsend [1992; OverDrive MP3 Audiobook, 2001]

“A person who thinks only about building walls, wherever they may be, and not building bridges, is not Christian.” — Pope Francis, February 18, 2016

A friend mentioned that this book had been very helpful and eye-opening in the wake of his divorce and what had gone wrong in his marriage, so I decided to check it out. I’m glad that I did.

I think the idea of boundaries is a nebulous one for most people. Consider the following scenarios:

Do we normally look at situations like those and think, “this person is encroaching on my boundaries”? Probably not. Yet Cloud and Townsend would contend that these are all boundary issues, places where Christians need to learn when it’s appropriate to say “no.” This can be difficult for us because we Christians are socialized to be self-sacrificing and agreeable. There’s a strong sense that being kind means never saying “no” to others when we can say “yes,” and when we do say “no,” we run the risk of being accused of not being Christian. I’ve had men accuse me of being un-Christian because I didn’t respond favorably to their advances on dating sites. That’s how far off the reservation the “Christians must always say YES” mentality goes.

Cloud and Townsend make the point that Christians are not supposed to be exhausted, reluctant, resentful givers; we’re supposed to be cheerful, deliberate givers. We can’t do that when we’re wearing ourselves out saying “yes” to everyone. We have to possess a sense of ourselves, our responsibilities, and our capacity to help others, then we have to know when someone is trying to shuffle their responsibilities onto us, or when our capacity for helping others has been tapped out. In doing so, we assert ourselves and can make focused, deliberate choices on whom we help.

In my case, divorce was already something of a crash course in boundaries. Going no-contact with an ex-spouse is easy—if you don’t have kids together. When you have kids, and (therefore) the disordered ex always has an excuse to contact you, it becomes a regular test of strength. I’ve been (for the most part) winning this test of strength and maintaining my boundaries with my ex-husband for over a year now. However, this book did open my eyes to all of the ways in which I had poor boundaries during my marriage. There were places where my ex-husband absolutely battering-rammed my boundaries, especially once other women came into the picture. And—being honest here—there were places where I had little respect for his boundaries as well. I could have done a lot better.

What this book has also opened my eyes to is what it really means when someone else says “no” to me. The sad truth is that I’ve been a somewhat needy person for a great portion of my adult life: first as the parent of a disabled child trying to complete a seminary degree with an unsupportive husband in tow, now as the single mother of both a disabled child and a toddler, still trying to complete that seminary degree. I’ve often had to rely on the kindness of others, and I’ve often been told “no.” I used to be miffed when people told me “no.” Now I realize that, when someone says “no,” that’s just them enforcing their boundaries.

There was a woman in my ex-husband’s old Mormon ward (this was from 2011 – 2013) who lived very close to us, so I thought of her as a potential source of help when I needed it, and she did help me with a few things. However, I often needed help in the evenings, and she always said “no” to helping me in the evenings, because of needing to put her four children in bed. At the time I felt a little hurt, but I’ve since realized that she was just enforcing a boundary. Bedtime was an important (and difficult) daily routine for her, so she didn’t do anything that conflicted with that.

Since reading the book, I’ve also come to see how boundaries apply in other ways. The example I gave above about the child who was upset about missing the arts & craft night actually happened a few weeks ago with my own daughter. Harley had neglected to tell me about the event and I had neglected to look through her bag and notice the flier, so we shared the blame, but she began to get very angry at me. I said, “Stop right there. You CAN be sad that you missed the event, but you CANNOT blame it on me and be angry at me. You will not get in trouble for being sad, but you WILL get in trouble if you take this out on me.” She found a healthier outlet for her sadness and I escaped a night of being hounded and scolded by my 9-year-old. Boundaries.

I began this article with a quote from Pope Francis about building walls and Christianity. I’m not a fan of Donald Trump, but I have to disagree with the Pope here, at least in principle. Indeed, I think the Pope has invoked exactly the “you must always say ‘yes'” Christianity that Boundaries is a response to. Christians build walls sometimes, whether physical or metaphorical. We lay down boundaries or we suffer for our lack of them. The Vatican has built metaphorical walls against things like ordaining women and allowing the use of birth control, and there is a literal, physical wall surrounding its premises. Christianity is about striking the right balance between building “walls” (boundaries) and building bridges. Whether or not it is a good idea for America to secure its borders and/or deport illegal immigrants is another matter, but we should be having that discussion without questioning the Christianity of either side.

This was a very valuable book and I would recommend it to anyone, whether Christian or otherwise. It will help you understand how saying “no” can enrich your life and give you direction and purpose when you say “yes.”