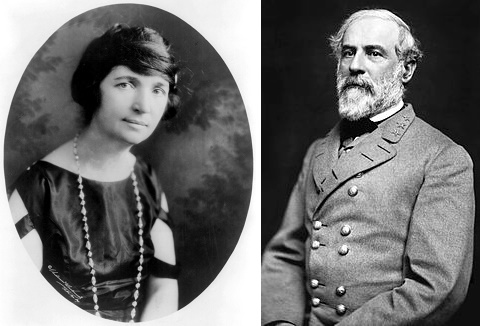 We’re all upset about that Robert E. Lee statue in Charlottesville, it seems. Either we’re upset over its proposed removal or we’re upset that it’s still there. The rally carried out by a group of torch-wielding “white nationalists” was probably counter-productive in that, now, any chance that the statue had of being seen as a remnant of a complicated and heart-breaking conflict in human history (which is what it is) rather than a clarion call of undiluted racism, has evaporated.

The Activist Mommy thinks she has the solution! They can’t take down the statue of Robert E. Lee (or other confederate monuments) unless they also take down the bust of “racist” Planned Parenthood founder Margaret Sanger . . . can they? She explains:

As a Washington Times article from earlier this year points out, Margaret Sanger founded Planned Parenthood “on racism [and the] belief in protecting society against ‘the unfit.’”

“We do not want word to go out that we want to exterminate the Negro population,” she wrote in one 1939 letter to a friend.

Think about that for a moment.

The founder of Planned Parenthood was racist in her ambitions. Her organization today continues to exterminate black babies at alarming rates.

The Activist Mommy is dead wrong in her assessment of Sanger. The quote on exterminating blacks appears on dozens of right-wing blogs and newspapers accusing Sanger—and pretty much nowhere else.

That’s because it’s out of context and ambiguously worded in and of itself. In context, it actually means, “We do not want people to think we are offering birth control as part of an effort to exterminate black people,” not “we are offering birth control to exterminate black people—but we need the public to think otherwise.” Sanger was condescending and paternalistic towards blacks, she was a positive eugenicist (though not a racial one), and she did hold some other views that would be considered ugly in our day and age, like wanting to sterilize the mentally disabled. [1]

But anyone who spends even two minutes reading what Sanger actually wrote about blacks would have a hard time coming away with the conclusion that she was some kind of racial Dalek screaming “EXTERMINATE! EXTERMINATE!”

She was endorsed by W. E. B. Dubois and Martin Luther King, Jr., she opposed segregation, favored integration, and spoke numerous times (if paternalistically) about wanting to improve quality of life for blacks. See here and here for examples.

Furthermore, Margaret Sanger opposed abortion. Her life’s mission was birth control, not abortion. She said of abortion, “While there are cases where even the law recognizes an abortion as justifiable if recommended by a physician, I assert that the hundreds of thousands of abortions performed in America each year are a disgrace to civilization.” She called the practice of performing an abortion as a form of birth control “dangerous and vicious” and stressed that abortion had no part in her birth control advocacy.

Bottom line being, she would not have at all been okay with Planned Parenthood’s current focus on abortion, whether for blacks or otherwise.

This is all beside the point though. There are plenty of other flawed heroes of history with public monuments that no one is freaking out about. For example:

All of these figures have multiple statues and monuments around the world. [2] If we’re going to take down the monuments to Confederate Generals because of their advocacy for slavery and racism, shouldn’t we take down the others?

Some would say, “Yes, absolutely.”

Luther, Calvin, Jefferson, Ghandi, and MLKJ all stood for something other than the things that make them sinful and flawed. Even if you dislike those men, or their religions, and even if their sins were extremely serious, it’s hard to deny that they did some good in the world.

As for Sanger, well, let me ask you this: do you like having sex without having to worry about having children? Yes? (I’d bet 99% of the right-wing bloggers trying to vilify her do!) Then you should get down on your knees and thank God for Margaret Sanger. You shouldn’t have any problem with a bust that memorializes her.

But the monuments to the Confederate Generals are about the wrong that they did. They fought on the wrong side of a losing war whose primary aim was to uphold the institution of slavery. It’s hard to argue that they did more good for the world than evil. They were valiant, courageous, admirable—and wrong.

They were also military geniuses. The only reason the South held on for as long as it did, outnumbered 1 to 4, was because it had the better generals. Certainly they should be honored in other contexts, like museums of military history.

But if my friends in the South really need public Civil War monuments in honor of their heritage, I suggest monuments to the 100,000 or so blacks who served the Confederate Army (for the most part, unwillingly) as laborers, cooks, and teamsters.

Then again, even that could be perceived as racially charged. Maybe it’s time to focus on the future of race relations rather than on its past.

[1] Historian Jean H. Baker explains, “During Sanger’s time, eugenicism—the belief that it was possible to improve the qualities of the human race through science—enrolled American presidents, from Theodore Roosevelt and Woodrow Wilson to Herbert Hoover; Supreme Court justices, including Oliver Wendell Holmes and Louis Brandeis; along with scientists from the most prestigious institutions in the United States. It promoted enlightened parenthood and raising healthy children, and also, in its darker side, supported involuntary sterilization—all in the name of improving heredity. It is no defense of Sanger to place her within the conventional wisdom of her times on this matter, though it is important to have a more nuanced view of her perspectives and the reasons she accepted aspects of a mainstream movement dedicated to improving human beings.” (Margaret Sanger: A Life of Passion. New York: Hill and Wang, 2011, p. 5)

[2] I have no idea why we even have statues of John Calvin. He requested to be buried in an unmarked grave to prevent pilgrimages to his body. A statue of himself is the last thing he would have wanted.